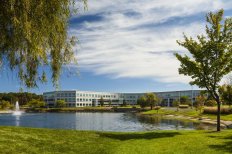 CHICAGO—The suburbs may have lost Motorola andCapital One, but some areas are still proving attractive to users. The north suburbs, for example, have gained momentum for five consecutive quarters and class A properties there have fared especially well. NAI Hiffman helped illustrated this by completing three transactions at Bannockburn Corporate Center that have brought the 206,000 square foot office asset from 38% occupied since the firm took over leasing and management in August of 2014, to a 91% occupancy today.

California-based Younan Properties Inc. bought the property back in 2006 when the market was hitting its zenith, but lost it to foreclosure when the economy collapsed.

“Bannockburn Corporate Center is a premier, class A office asset in a great location within the North Suburban submarket. It has been a tremendous project to work on, and we are thrilled by the rapid increase in interest and leasing results,” says Linda Garske, senior vice president with NAI Hiffman’s office services team.

The team has had other recent successes in the area. As reported in GlobeSt.com, in early 2013, NAI Hiffman took over leasing duties at Edens Corporate Center in Northbrook. And by February of last year, the company had signed a series of new leases and renewals at the 188,000 square foot center and increased occupancy from 60% to over 90%.

Bannockburn Corporate Center, located at 3000 Lakeside Dr. in Bannockburn, is a 3-story office building set in a campus-like setting, with trees and a pond along the entrance.

Brian J. Rogal is a Chicago-based freelance writer with years of experience as an investigative reporter and editor, most notably at The Chicago Reporter, where he concentrated on housing issues. He also has written extensively on alternative energy and the payments card industry for national trade publications.Bio