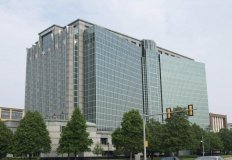 Stay ahead in Chicago! Sign up for GlobeSt.com’s to get our Chicago AM Alert delivered to your inbox daily.

One O’Hare Centre in suburban Rosemont recently sold for $83 million, a good illustration of the desirability of class A properties

CHICAGO—The suburban office market had a strong finish to 2015, and saw 479,474 square feet of absorption, according to a new report on the region from CBRE. This was more than half of the year’s total of 873,686 square feet. Furthermore, class A vacancy stands at just 13.0%, equal to the level it last hit before the recession. And this is having a ripple effect throughout the market.

“Many users are choosing the next alternative, which is the older properties in the B market,” Bill Elwood, executive vice president of CBRE, tells GlobeSt.com. The B properties in the suburbs have very attractive pricing, he adds, and this helps explain why they led the region in fourth quarter absorption, with 277,655 square feet.

“Tenants need to be prepared to pull the trigger faster,” Elwood advises. Although the numbers do not suggest an extremely tight market, even for the A properties, many of the best locations are essentially gone. “Even B blocks of space in the right location, such as Oak Brook, are going to get leased very quickly.”

Part of the problem is that no one has built new suburban product in years, he adds. However, now at least Elwood can sketch out how it would be possible for new construction to begin. “No one is going to build on spec. But perhaps if someone decides to anchor a new building,” a developer might be willing to break ground. But “a tenant is going to have to pay at least $26 net to anchor a property,” and that will be difficult in the near future.

Brian J. Rogal is a Chicago-based freelance writer with years of experience as an investigative reporter and editor, most notably at The Chicago Reporter, where he concentrated on housing issues. He also has written extensively on alternative energy and the payments card industry for national trade publications.